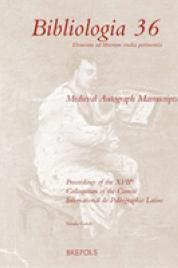 What is an autograph? How is it possible to define it? And how can we distinguish the hand of the writer, scientist, or translator – that is, of the learned person setting down his thoughts – from the hand of a pupil or copyist trained in the same style? Autographs have long been an especially challenging area of research into medieval manuscripts, for the finished product is intimately linked to both the author’s thought and his hand. Many well-known medieval authors had already been accorded scientific representations and became known as a result of these. They were joined by new names, a fact which widens the scope of research in the field of autographs and invites new questions.

The XVIIth Colloquium of the Comité International de Paléographie Latine, which was held in Ljubljana between 7th and 10th September, 2010, was dedicated to autographs. In addition to scientific contributions by established paleographers, historians, literary and art historians, there were also inspiring papers by younger researchers. The colloquium was receptive to the presentation of new methods and processes of research into medieval manuscripts in general. These Proceedings of the XVIIth Colloquium contain 37 scientific papers documented with 239 illustrations as well as with further graphic elements.