How the Secularization of Religious Houses Transformed the Libraries of Europe, 16th-19th Centuries 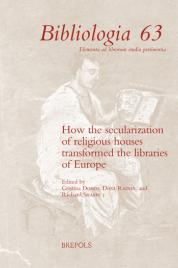 It is the most important book-historical story for the survival and accessibility of Europe's heritage of the written word, one that interacts with major historical themes and still connects with future issues for the continuing role of books and libraries in the European heritage.

The closure of religious houses, in varying circumstances, affected all of Europe at some point between the sixteenth and nineteenth century. At different times and in different countries the consequences were widely varied, in some cases preserving medieval and early modern collections intact, in others abandoning books to their fate, or transferring them piecemeal into new ownership to serve different cultural purposes. Integral preservation or dispersal may each be viewed in positive or negative terms. For religious and political history there are many, and bigger, factors involved, and the effects of secularization worked on many things beside libraries and books. None the less, by focusing on books and libraries through these changes a particular narrative emerges of great cultural importance. It is the most important book-historical story for the survival and accessibility of Europe's heritage of the written word, one that interacts with major historical themes and still connects with future issues for the continuing role of books and libraries in the European heritage.

A conference held in Oxford in 2012 brought together thirty experts in different aspects of this process or with knowledge of its impact in different countries and at different periods. The result was to bring together and share for the first time the similar and different experiences of different European countries, from Portugal and Spain in the west to Poland and Ukraine in the east, from Finland and Sweden in the north to Naples in the south, with ramifications stretching to North and South America. While reading this volume of collected essays, the reader may notice a disparity in the evidence that each author has been able to bring to bear upon their subject. Provenance research is well advanced in some territories, less so in others. In the decade since the conference and this publication, there have been some attempts to bridge certain gaps. But in general, there has been little new work in the years since the conference took place. The editors anticipate that this publication will stimulate further research, bridging some of the gaps visible in the evidence presented in this volume. Multiple avenues for further investigation open up, indeed, in historical and cultural studies, such as the impact of the secularization on nonreligious libraries, and the change in attitude with respect to certain disciplines and even to erudition itself.