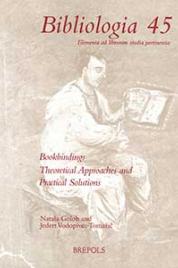 Bookbindings: Theoretical Approaches and PracticalSolutions is a collection of twelve studies encompassing considerations on bookbinding structures, practices of binders in the Middle Ages and the Renaissance, as well as theoretical reflections on the cataloguing of bindings, and on the choice of conservation and restoration methods. Much of the attention is on Portuguese, Estonian and Slovenian library and archive material – that is, on material that has rarely been the centre of attention. The volume opens with two contributions on bookbinding databases by Athanasios Velios and Sonja Svoljšak and others. These offer deliberations on the effective selection and coding of descriptive elements, while also expressing the need for the adoption of a rigorous and shared terminology to enhance compatibility among databases. Anja Dular discusses the historical aspects of life and labour conditions, along with the financial and legal frameworks in Carniola in the early post-medieval period. Georgios Boudalis, meanwhile, puts under scrutiny the established opinion of the "Coptic" origin of Early Christian bindings, while also drawing attention to the documentary expressiveness of images of books in early medieval paintings. Ines Correia presents results of first-hand extensive research on 15 illuminated manuscripts from the Portuguese monastery of Lorvão, analysing the various layers and the sequence of restorative procedures. Rita Castro and others discuss the results of fundamental investigation into re-bound Romanesque manuscripts from the monastery of Santa Cruz in Coimbra. Carlo Federici and Melania Zanetti contribute an exhaustive study on the bindings of books printed by Aldo Manutius (1494 to 1515). Their study deals with the question of whether this Venetian printer had his own preferred bookbinder, to which the answer is negative. Basing her observations on the reuse of fragments, Nataša Golob dedicates her article to matters surrounding the recognition of characteristics of individual bookbinders and their works. Gerth Kulemann, a bookbinder from Tallinn (prior to 1550), comes under the examination of Liia Rebane. Of interest in his works, which document the transition from the Gothic to the Renaissance, is the iconographically distinctive decoration. Bindings of Books of Hours from Portuguese collections, their problematic structural elements, and the iconography of their decorations, which express the connection to seamanship, are the topics of Rita Araújo’s contribution. The volume is brought to a close with two studies, each providing a detailed description of research and restoration efforts: Jedert Vodopivec Tomažič analyses the variance of bindings in Johann Weichard Valvasor’s Die Ehre dess Hertzogthums Crain (1689), made at the time as it was published. The study by Blanka Avguštin Florjanovič, meanwhile, follows the chronological sequence of steps and dilemmas in the restoration of a Gothic Pontifical in light of the principles of minimal interventions.