Scribes and the Presentation of Texts (from Antiquity to c. 1550) 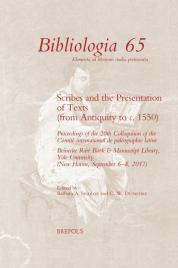 What roles did scribes play in Antiquity, the Middle Ages, the Renaissance?

Scribes played complex, often overlooked roles in the production of hand-written texts across Antiquity, the Middle Ages, and the Renaissance. Some scribes simply copied the exemplar; other scribes participated with authors and decorators in establishing the mise-en-page and overall appearance of a text. Many decisions needed to be made regarding the selection of text script; the style of rubrication, display scripts, and initials; the placement and execution of potentially elaborate illuminated images. What was the role of the scribe in contributing to the decision-making process or in determining the final format and material appearance of a document, scroll or codex?

This volume explores many of the choices that a single scribe or groups of scribes would need to make when writing and presenting a text, whether in a monastic, cathedral or lay setting. The articles in the volume range from case studies of a single artifact to the analysis of multiple copies and versions of a particular text.

The authors include eminent specialists in the field of manuscript studies as well as mid- and early career scholars.

Dr. Barbara A. Shailor became the Director of the Beinecke Rare Book and Manuscript Library at Yale University in 2001; she then assumed the position of Deputy Provost for the Arts. Her award-winning volume “The Medieval Book”, published by the University of Toronto Press, is in its 6th printing; among her other multiple publications is the Catalogue of Medieval and Renaissance Manuscripts in the Beinecke Rare Book and Manuscript Library (3 vols.).

Dr. Consuelo W. Dutschke, recently retired Curator of Medieval and Renaissance Collections at Columbia University, has worked with medieval manuscripts since graduate school days: from checking typed texts against microfilms of manuscripts; from paleography classes; from preparing first-level entries for UCLA’s catalogue of medieval manuscripts, up through writing catalogues of the manuscripts held by the Claremont Colleges and by the Huntington Library; as Curator at Columbia she was responsible for adding to the collection, for teaching paleography from this collection, as well as beginning the online Digital Scriptorium database.