Transmission of Knowledge in the Late Middle Ages and the Renaissance 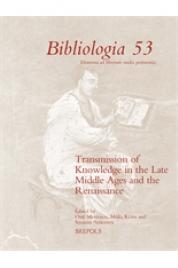 What  were people really reading at the end of the Middle Ages and in the Renaissance?The nineteenth century saw the rapid development of textual criticism for establishing the “best” and “most authentic” forms of both Ancient and Mediaeval texts thanks to the method perfected by Karl Lachmann, who based himself on the insights gained during the eighteenth century.  Lachmann’s method has been further refined by later philologists, with, most interestingly, the use of computers in establishing the mutual relations of manuscript witnesses since the last decades of the twentieth century. However, the interest in what form the texts, both Ancient and Mediaeval, were actually circulating in the Late Middle Ages and in the Renaissance, has been slow to emerge as an area of scholarly interest. In other words: what did the readers actually get in front of their eyes, and acted upon as, say, doctors, historians, theologians between the thirteenth and sixteenth centuries?This volume explores the Late Medieval and Renaissance transmission of texts of different genres, languages and periods from the book historical point of view, taking into consideration not only the textual but also the material aspect of the traditions. The authors include eminent specialists as well as mid- and early career scholars.Prof. Outi Merisalo (University of Jyväskylä) has published extensively on the history of the Latin script in the Middle Ages and the Renaissance and medical manuscripts, among others. She is currently PI of an international book historical project on Late Medieval and Early Modern Libraries as Knowledge Repositories, Guardians of Tradition and Catalysts of Change (Lamemoli, 2017-2021, Academy of Finland & University of Jyväskylä).  For a full list of publications, see https://staff.jyu.fi/Members/merisalo/publications.htm.Dr. Susanna Niiranen, Senior Researcher at the Department of History and Ethnology, University of Jyväskylä, Finland,  has published extensively on various aspects of medieval and early modern literature, medicine, gender, vernacularisation and transmission of knowledge.  In the Lamemoli project she is reconstructing the book collections of Catherine Jagiellon and her son Sigismund I Vasa, King of Sweden and Poland. For a full list of publications, see http://www.jyu.fi/hytk/fi/laitokset/hela/en/staff/niiranenpublications.Dr. Miika Kuha (University of Jyväskylä) completed his PhD dissertation on Late Medieval Venetian historiography in 2017.  He is currently preparing a critical edition of the Latin chronicle of Venice by Benintendi de’ Ravagnani (1381–1365).  In the Lamemoli project he is conducting research on the library of doge Leonardo Donà (1532–1613).