Science in the Monastery 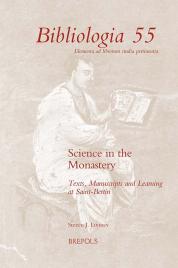 The traditional view of monastic orders in late-medieval scholastic culture has been relatively muted. Beyond the Franciscan and Dominican orders, and to a far lesser extent, the Augustinians and Cistercians, the older monastic orders (and especially the Benedictines) played a smaller role in the university during the thirteenth through the fifteenth centuries. Yet if the library collection of Saint-Bertin is examined more carefully, one finds that many of the books were added by alumni of the University of Paris and Louvain, and in one instance, Cologne, and that as a whole, the monastery’s collection reflected the changing currents within late medieval intellectual society. Science in the Monastery proposes to analyze Benedictine science using Saint-Bertin as a vehicle.

Steven J. Livesey is Brian E. and Sandra O’Brien Presidential Professor of the History of Science at the University of Oklahoma. His research interests focus on medieval science, history of early scientific methodologies, science in medieval universities, and manuscript studies.