A Man and His Manuscripts

The Notebooks of Ademar of Chabannes (989–1034)
Illustration 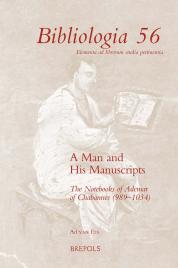 This book is devoted to the life, autograph notebooks and manuscripts of Ademar of Chabannes (989-1034), a monk of Saint-Cybard in Angoulême and Saint-Martial in Limoges. Together Ademar’s writings bear witness to his enormous productivity and to his many talents as a historian, preacher, musical composer, liturgist, teacher and artist. His notebooks in particular, assembled in manuscript VLO 15 at the University Library of Leiden, shed a unique - and neglected - light on Ademar’s capacities as a teacher. An analysis of the texts in VLO 15 shows that Ademar was interested in an extended curriculum (including medicine and Arabic astrology) and that he used a variety of techniques and methods to instruct his pupils.

In this study extensive attention is paid to a critical, palaeographical and codicological investigation of the extant manuscript evidence, including some newly discovered material. Ademar’s versatile writing habits, his way of preparing his parchment and the flexible way in which he constructed and used his quires are discussed, with detailed descriptions of palaeographical samples and numerous colour plates. These will enable the reader to follow the investigations into past ascriptions of manuscripts to Ademar.

The evidence here presented offers a more positive and nuanced view of Ademar, who in recent years has been portrayed as a solitary forger leading a marginal life at Saint-Cybard, his place of exile, on account of his attempts to promote his patron saint St Martial to a position as one of Christ’s disciples. Allegedly, the ensuing conflict led to his decision to depart for the Holy Land, never to return. However, the evidence of the manuscripts makes this unlikely and proves that Ademar had every intention of returning to his beloved monastery to continue his work there.

Ad van Els studied economic history in Leiden, philosophy in Nijmegen and medieval studies in Utrecht (PhD). He specialized in the manuscripts of Ademar of Chabannes since 2004.