The Bible at Montecassino
Illustration 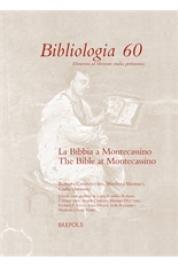 The first publication offering a scientific description of the Cassinese biblical collection, which holds Bibles of all typologies. Given the large number of witnesses still held in loco and their high variety, Montecassino represents a particularly advantageous, if not unique, situation for the analysis of the material and the study of textual changes undergone by the Bible as a book during the Middle Ages.

For manuscript historians, the Bible in the form of a codex represents a handcrafted object of the utmost importance: it was the sacred text par excellence and served as a vital reference point in the lives of medieval monks. In addition, it functioned as an indispensable tool for daily liturgical celebration, and as a study text and individual reading book for the purpose of moral edification. The manuscript collection of the Montecassino Abbey presents an exemplary case study, both for the total number of biblical manuscripts it preserves (just under a hundred, and for the diversity of types (complete ‘monolithic’ Bibles, Old and/or New Testament sequences of varying size and physiognomy, and individual glossed books with commentary beside the text), as well as for the presence of a significant group of codices in Beneventan minuscule produced for internal use within the same Abbey or in its dependencies in a period centered around the eleventh century (with sporadic extensions into the twelfth and thirteenth). The present catalogue aims to deepen our current knowledge of the presence, transmission and reception of the Bible in one of the most important and emblematic medieval Benedictine monasteries.

Roberta Casavecchia is a Researcher of Latin Language and Literature at the University of Cassino.

Giulia Orofino is a Professor of Medieval Art History at the University of Cassino and Southern Lazio. She is the general editor of the Corpus of the illuminated manuscripts of the Archive of the Montecassino Abbey.