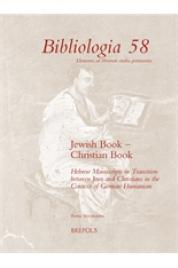 Jewish Book – Christian Book: Hebrew Manuscripts in Transition between Jews and Christians in the Context of German Humanism is intended as a contribution to the history of the production, circulation, and reception of Hebrew materials outside of a Jewish context.

An intriguing development in the late fifteenth and early sixteenth-century Christian Hebraism is how and why Christian scholars came to produce their own Hebrew books. Jewish Book – Christian Book: Hebrew Manuscripts in Transition between Jews and Christians in the Context of German Humanism offers a novel examination of this phenomenon in light of nearly unknown Hebrew manuscripts produced by German Hebraists in that period. Anticipating Hebraist printed editions, the Hebraist manuscript copies of Jewish texts represent one of the earliest attempts of Christians to independently form a stock of Jewish literature, which would meet their scholarly needs and interests, and embody a unique encounter of Jewish and Christian views of the Hebrew text and book. How Hebraist copyists coped with the inherent “Jewishness” of the Hebrew texts and in what ways they transformed and adapted them both textually and materially to serve Christian audience are among the key questions discussed in this study.

Ilona (PhD 2015, The Hebrew University of Jerusalem) is a research associate in the Cluster of Excellence “Understanding Written Artefacts” at the Hamburg University. She specializes in the Hebrew manuscripts and book collecting practices, with a particular focus on the circulation of Jewish books between Jews and Christians.