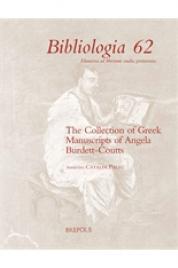 The story of Angela Burdett-Couts'collection of Greek manuscripts is investigated here for the first time; the author has identified and personally examined, described and reproduced her ca. 100 manuscripts in Ann Arbor University Library, in Athens Public Library, in London's British Library and in Providence, Rhode Island, Brown University.

Baroness Angela Burdett-Coutts (1814-1906), descendant of a wealthy and well-known family of bankers, inherited quite young, through a series of unpredictable circumstances, the enormous fortune of Thomas Coutts, her maternal grand-father. She spent most of her long life in London, where she occupied a prominent position in society, becoming well-known not only for her splendid life-style and her important literary and political acquaintances, as, for instance, Charles Dickens and Admiral Nelson, but also for her active role as a philanthropist. This book explores a little-known side of her life; although she did not know Greek, she became the owner of ca. 100 Greek manuscripts, mostly theological, datable between the tenth and the sixteenth century, a part of which she donated to Highgate School. The manuscripts, with all the Baroness's possessions, were dispersed at auction in 1921 and in 1987 and are now mainly divided between American and European University Libraries. This book has identified for the first time the Baroness's Greek manuscripts, located and described them in detail, with special attention to their script style and their origin, adding to their description one or two plates of each codex.

Annaclara Cataldi Palau was Visiting Professor in Greek Palaeography at King's College (2000-2005), then at Royal Holloway (2011-2016), and is since 2012 member of the Accademia Ambrosiana in Milan.