Memory and Recollection in the Aristotelian Tradition 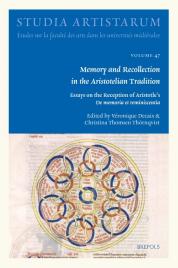 Forming part of Aristotle’s other minor writings on psychology that were intended as a supplement to his De anima (“On the Soul”) and known under the collective title Parva naturalia, Aristotle’s De memoria et reminiscentia gave rise to a vast number of commentaries in the Middle Ages. The present volume offers new knowledge on the medieval understanding of Aristotle’s theories on memory and recollection across the linguistic traditions including the Byzantine Greek, Latin and Arabic reception.

Véronique Decaix is associate professor in Medieval Philosophy at the University Paris 1 Panthéon-Sorbonne. Her research focus is on psychology during the Middle Ages, more precisely on intentionality in cognitive processes such as sensation, memory, dream and intellection. She has recently published a monograph on Dietrich of Freiberg (Vrin, 2021).