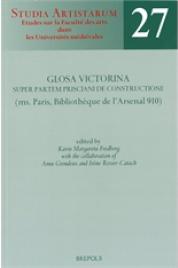 From the twelfth century onwards, notable advances in the theoretical development occur in independent treatises on syntax, which on their side are intimately linked with medieval commentaries on the last two books, the so-called Priscian Minor, of the Institutiones Grammaticae I-XVIII, where Priscian deals with syntax. A number of the independent treatises on syntax are now available. But of the many commentaries on Priscian Minor known, only a few have been edited, so let me start by editing an interesting 12th c. gloss on Priscian Minor, called the Glosa Victorina. Priscian Minor itself begins with introducing the notion of what is a perfect sentence, what is a well-formed utterance and which parts of speech are indispensable or the most important, stating their order of importance : noun, verb, participle, pronoun, and the indeclinable word classes. As the argumentation unfolds, comparisons between letters, syllables and words are introduced providing a continuity and refinement on what was taught earlier in the so-called Priscian Maior, and how this concerns grammar on the level of syntax. Very quickly, this leads to an interdisciplinary discussion of what constitutes a perfect sentence (according to the grammarians and the dialecticians), involving the commentators in redefinitions of the principal parts of speech and explaining their distinguishing features. In this process, notions of substance, of person, of deixis, of reference – signification, and many other important grammatical issues are discussed. So in principle, the beginning of any commentary on Priscian Minor provides its author with scope for developing his particular doctrines and ideas of prime importance in linguistics.
Here the Glosa Victorina deserves a closer look, because it provides us with insights into discussions normally only hinted at by Abelard, or a use of terminology which then becomes refined and partially rejected by William of Conches and Petrus Helias.