The “Psychomachia” Codex from St. Lawrence (Bruxellensis 10066-77) and the Schools of Liège in the Tenth and Eleventh Centuries 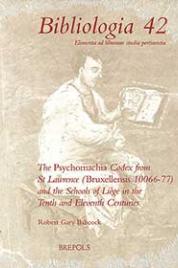 Auteur
Robert Babcock
Éditeur
Brepols
Date de parution
2017
Lieu d'édition
Turnhout
Prix éditeur
75.00€
Langue
Français
Numéro dans la collection
42
Collection / Revue
Collections
Appartient à la collection/revue
Bibliologia. Elementa ad librorum studia pertinentia
ISBN
978-2-503-56871-3
Descriptif matériel
328 p., 12 ill. noir et blanc, 210 x 270 mm
This monograph focuses on Brussels, Royal Library, MS 10066-77, a tenth-century volume comprised of illustrated copies of Prudentius’ Psychomachia and the bestiary known as the Physiologus, to which tenth- and eleventh-century readers added a dozen short school texts. Largely for its illustrations, the manuscript has been considered a monument of Ottonian illumination and one of the principal treasures of the Royal Library in Brussels. The allure of its illustrated texts resulted in inadequate attention to the minor additions to the volume. This study reveals that these have a coherent origin (in Liège) and purpose (the study and teaching of allegory); and that they provide detailed evidence for teaching in the Liège schools of the period. Among the additions are philosophical, mathematical, prosodiacal, and lexical works. These can be specifically related to the studies of Liège writers of the tenth and eleventh centuries, and evidence is presented showing that some of these writers demonstrably used this very manuscript. A Latin glossary is among the most interesting additions, as it preserves a record of a local Latin vocabulary used by Liège writers of the period. The monograph concludes with a survey of tenth- and eleventh-century writers from Liège, and what ancient texts they knew. A comparison of their common reading culture, supplemented by evidence from surviving manuscripts and from medieval booklists, allows a fuller picture of the texts that were known and taught in the Liège schools at the time, and provides a new basis for assessing the teaching in these schools.

Robert Babcock is Professor of Classics at the University of North Carolina, Chapel Hill. A former fellow of the Alexander von Humboldt-Stiftung and the Flemish Academic Centre, he is a Foreign Fellow of the Royal Flemish Academy of Belgium. His research interests include ancient literature and its transmission, Medieval Latin, and manuscript studies.