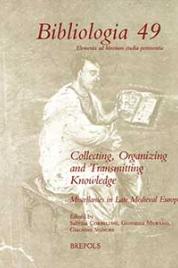 Miscellanies may easily make up the single largest group of medieval manuscripts. It was especially in the Late Middle Ages that the number of such multitextual manuscripts, often compiled by lay and religious individuals for personal or communal use, grew substantially. In spite of their relevance for the reconstruction of medieval culture, such manuscripts have not until recently garnered much scholarly interest.

The present volume pinpoints the societal and cultural importance of fourteenth- and fifteenth-century miscellanies as well as their role in the understanding of textual creation, transformation and complexity, in both late medieval and early modern societies. The contributions scrutinise, on the one side, text corpora and textual traditions that had a seminal impact on late medieval European culture: the texts of Geoffrey Chaucer and Reginald Pecock, the manuscripts of Dante’s Commedia, late medieval Italian and Latin poetic anthologies, but also miscellanies from the Council of Basel and multitextual manuscripts containing anti-Hussite texts. On the other side, the volume takes into account individual scribes/compilers and collections: from remarkable cases such as Pico della Mirandola and Leonardo da Vinci, to personal collections made up by lesser-known but not less significant compilers and users. Under a strong pan-European umbrella, the volume embarks on specific problems, among which authorship, non-autonomy, composition, reception and use, along with more general issues such as multilingualism or the relationship between image and text.

Though ubiquitous and complex, miscellanies blend the diverse cultural, economic and social tendencies of their prosumers, thus proving to be tokens of the appropriation of medieval knowledge and providing snapshots of a dynamic textual culture.

Sabrina Corbellini is professor of the chair ‘History of Reading in Premodern Europe’. She specialises in the study of cultural history in late medieval Europe, with a particular focus on the reconstruction of ‘religious literacies’ in the European urban environment.

Giovanna Murano is a paleographer and codicologist. She specialises in the history of the production and use of the medieval book, history of universities and medieval canonical and criminal law.

Giacomo Signore is a doctoral researcher and specialises in medieval philosophy. He explores the issues of composition and use of Latin and vernacular miscellanies in the Late Middle Ages.