Alexander of Aphrodisias in the Middle Ages and the Renaissance 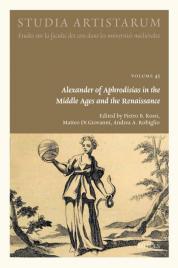 An original thinker in his own right and the greatest ancient commentator on Aristotle, Alexander of Aphrodisias (fl. 200 AD) contributed in a crucial way to canonize Aristotle as an indispensable reference for philosophy of all times.

The greatest ancient interpreter of Aristotle, Alexander of Aphrodisias (fl. 200 AD) exerted a profound and enduring influence upon philosophy from Boethius until the modern era. Alexander’s interpretations laid the foundation for multiple philosophical views which were promoted as quintessentially Aristotelian by both Islamic and Latin thinkers throughout the Middle Ages. In the Renaissance, the University of Padua, a leading center of philosophical education and thought, established a scholarly tradition named “Alexandrinism” after him.

Paolo Accattino (1950-2015), a distinguished scholar of Alexander, made many noteworthy advancements to the field. With the aim of honoring Accattino’s memory, lifelong colleagues and associates P. Donini and L. Bertelli discuss his contributions. They are joined by a cohort of scholars (A. Bertolacci, M. Di Giovanni, J. Biard, A. Corbini, E. Rubino, L. Silvano, B. Bartocci, P.D. Omodeo, F. Iurlaro) who explore various key elements of Alexander’s legacy from Ibn Sīnā to Hugo de Groot. The volume presents new understandings concerning the reception of Alexander, offers new lines of inquiry, and opens potential avenues of research regarding his medieval and Renaissance afterlife.