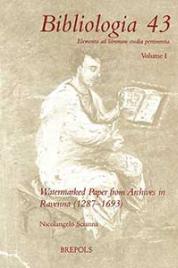 Unique repertoire of watermarks scanned from the manuscripts of  Medieval Civil Notaries and Church Offices in Ravenna, Italy.

This first repertoire of watermarks, acquired in full size, directly from volumes of manuscripts will be equally interesting to paper historians and those who study or are passionate about antique paper artefacts, alike. The author’s conclusions trace a trail towards the continued study of paper as an important material in the history of humanity.

Reproducing the watermarked paper, in scale of 1:6, allows the author to contextualise the primary and countermark designs within the whole folio carrying the mark. The detailed set of paper measurements includes distribution and width of chain and laid lines. Countermark findings are described as specific case studies. Results and conclusions from experimental studies, such as porosity and transparency, provide additional evidence on the  characteristics of antique paper.

A one of a kind, extensive study on the paper stocks used by civil notaries and Church offices in Ravenna, Italy, leads to hypotheses that shed light on the history of papermaking in Medieval Italy. New watermark designs and an additional group of designs have been documented, which are not listed in the Briquet or any other repertory.
This work is divided into three sections plus conclusions: a brief history with specific in-depth studies; a repertoire of almost 3,000 scanned images of watermark designs, listed by type; and 641 in scale reproductions of watermarked folios. The author ends this look into the world of antique paper with a discussion on the spread of paper to the city of Ravenna and notes a method for intrepreting the placement of the mark on the mould.

After completing a degree in Biological Sciences, Nicolangelo Scianna was an apprentice at the Istituto di Patologia del Libro (Rome, Italy), where he worked in the biology lab and on restoration techniques. He was later employed at conservation institutes in Italy and France and in 1974, began working as a freelance conservator-restorer. From 1994 to 2008 Nicolangelo Scianna was a professor (contract position) at the Facoltà di Conservazione dei Beni Culturali (University of Bologna in Ravenna), where he taught ‘Book and Paper Artefact Restoration’. Since 2004, Nicolangelo Scianna has held the position of Scientific Supervisor at the Laboratorio di Restauro del Libro dell’Abbazia S. Maria del Monte in Cesena, Italy.